Secretary of Defense James Mattis, the last sane man left in “the room,” resigns. The president threatens to shut down the government if he doesn’t get funding for his border wall. The stock market is tanking. And it’s the first day of winter, Ned Stark. We’re there. Or as Donald Trump might tweet, “We’re their.”

“A nation without borders is a nation not at all. Without borders, we have the reign of chaos, crime, cartels and believe it or not, coyotes,” Trump said of the Senate spending bill he’s refusing to sign due to it not meeting his demands on border security funding pic.twitter.com/aX3BgpTXX3

Do you think he and Pence think these are the kind of coyotes that walk around with dynamite from ACME?

For Secretary of Defense James Mattis, the line in the sand was the fact that his boss no wanted to align in the sand. Specifically, in Syria. When Donald Trump went against the advice of Mattis and the other Joint Chiefs of Staff and in favor of whatever Sean Hannity and Bill Shine advised, the erstwhile four-star general said, “Yup, I’m outta here.”

Mattis joins a slew of well-meaning Republican types who boarded the H.M.S. Trump but then decided, you know what, I’m going to abandon ship before it strikes the iceberg.

…and here are the two excerpts most relevant:

One core belief I have always held is that our strength as a nation is inextricably linked to the strength of our unique and comprehensive system of alliances and partnerships. While the US remains the indispensable nation in the free world, we cannot protect our interests or serve that role effectively without maintaining strong alliances and showing respect to those allies.

I believe we must be resolute and unambiguous in our approach to those countries whose strategic interests are increasingly in tension with ours. It is clear that China and Russia, for example, want to shape a world consistent with their authoritarian model — gaining veto authority over other nations’ economic, diplomatic, and security decisions — to promote their own interests at the expense of their neighbors, America and our allies.

In short: Stop pissing off our friends and cozying up to our enemies.

Kelly’s gone. Mattis is gone. So who’s the adult in the room? Kellyanne? 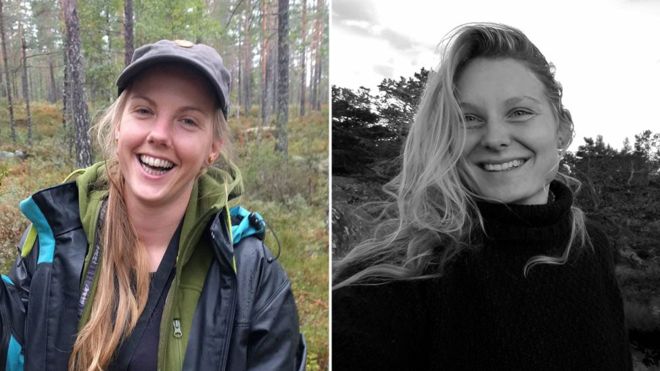 Two Scandinavian women, both in their twenties, trekking by themselves in the remote Atlas Mountains region of Morocco. For a quartet of local men, this was seen as an opportunity. The bodies of  Louisa Vesterager Jespersen, 24, from Denmark and Maren Ueland, 28, from Norway, were found on Monday. They had been camping near Toubkal (13,671 feet) north Africa’s highest peak.

Motive: the four men, all apprehended, have pledged allegiance to ISIS and were heard on a video pledging allegiance to its leader. Yes, at least one of the women were beheaded and if you search (not very hard) on the internet, you can see footage of the horrific act. People are just so messed up.

So we were on a little road trip over Labor Day weekend with one of our oldest friends, whose daughter was just beginning college. We asked him what’s going on in high schools these days, and he asked if we knew anything about “Juuls.” Never heard of them, we said.

He then proceeded to tell us how Juul is an incredibly popular type of E-cigarette that you can hide in the palm of your hand. One cartridge produces the nicotine kick of an entire pack of cigarettes. Juul, he told us, is rampant in high school classrooms.

Vampires hooking the next generation of nicotine addicts. https://t.co/cdbQPVJms4

How rampant? Yesterday Altria, the tobacco company which purchased a 35% stake in Juul earlier this year for $12.8 billion, handed the company a bonus dividend of $2 billion. Now, we’re not sure how the folks who run personnel for this 1,500-person company based in San Francisco want to divvy up the proceeds, but per staffer this would balance out to a $1.3 million bonus per staffer (and that’s how we’d do it). This way, everyone at Juul could afford to at least rent in San Francisco or Tiburon or Sausalito.

Think about that: you work for a company whose chief goal is to hook teenagers on nicotine, spurring a wave of emphysema and lung cancer for the 2050s and beyond. And you’re doing it near Silicon Valley, where all businesses purportedly exist to “make the world a better place.” And for your miscreantism you may walk home at year’s end with a million-dollar bonus. What a time to be alive….

If you missed this a couple days ago, that’s Cooper Dawson, a three-star defensive end recruit from South Carolina and a five-star human being. For his NLI announcement, Dawson brought out a friend who suffers from cerebral palsy, Kingsley Feinman, to help and actually make the announcement.

Dawson missed his senior season with a torn ACL but as he said at the gathering, “Kingsley taught me that the only disability is a bad attitude.”

What a cool young man. And Cooper, that’s Tom Rinaldi calling on your other line…

We got to thinking, based on SNL‘s skit about what if Trump had never been elected president…what if Adolf Hitler had never been born? There’s probably been a movie or book (or three dozen) tackling this hypothetical in the past, but the world would be such a different place.

Consider: Industrialization may have proceeded more slowly, as World War II spurred the acceleration of some of the greatest (and most worrisome) technological advancements in history. That mustache above might be acceptable, as would the name Adolf.

Granted, Hitler did not create nationalism or racism, he just exploited it (sound like any leader you know?). Something to consider: Adolf was one of six children, three of whom died in infancy. Those are 50-50 odds, but the world came out on the wrong side of them. The fate of 70 million lives, cut short, came down to a coin flip.

A true teen pop idol, Ricky Nelson was the son of arguably the most popular TV couple in the 1950s and early Sixties, Ozzie and Harriet Nelson (who were also married in real life). Pop would put his son’s songs onto the show and record sales would soar. This was Nelson’s second and last No. 1 hit, in 1961. Nelson died on New Year’s Eve 1985 the way all true rock stars should—in a small plane crash en route to a gig. He left the world his songs and his extremely blond sons, who would record “After The Rain,” an early ’90s hit that was big on the MTV.

The 14th-ranked Bulls, who have defeated West Virginia and Syracuse, are 11-0. No. 20 Marquette is 9-2, with losses at Indiana and versus No. 1 Kansas.