Extraordinary footage shows a scientist’s too-close-for-comfort encounter with a killer whale earlier this month in the waters of Antarctica https://t.co/0A1QdSLm1J pic.twitter.com/71GY5qv0wA “That’s what we do, we play basketball.”

Love this from Charles Barkley on TNT last night, although the “That’s what we do, play basketball” is not the essential pull quote. The essential quote here is, “When did we ever get to the point where all people talk about is money?”

Charles was on fire last night. He also had some thoughts on Jussie Smollett:

MUST WATCH: Charles Barkley savagely roasts Jussie Smollett all night long on @NBAonTNT… and they tried to cut away from it, but he wouldn’t let it go. Shaq couldn’t stop laughing. 😂

“Do not commit crimes with checks… GET CASH MAN!” pic.twitter.com/jO7t9z1JM3

Does this mean Jussie Smollett will soon sue TNT for $250 million?

“Avon?” Swanson repeated. “Avon? AVP, are we talking about the cosmetics company.

Possibly because the hedge-funder didn’t hedge, or because his track record is so estimable, the stock shot up. When he first mentioned it, Miller added that it was trading at a buck-95. By the time CNBC’s producers posted the ticker 20 or so seconds later, it was trading at $2.01. By the end of the segment, as you can see by the above screen grab, it was up 37 cents, or nearly 20%. This morning, just a little more than three weeks later, Avon (AVP) is trading at $3.11, or up 58%.

In just three weeks. Miller claimed it could be a ten-bagger, Susie B.

We bought some AVP the moment Miller mentioned it (yes, sometimes investing really is that simple). Wish we’d bought more.

Watch Fox News host Tucker Carlson call one of his guests a ‘tiny brain…moron’ during an interview. NowThis has obtained the full segment with historian Rutger Bregman that Fox News is refusing to air. pic.twitter.com/kERYPUaGLY

Listen to this if you haven’t already. Dutch historian Rutger Bregman appeared at Davos a couple weeks ago and shamed the billionaires about flying in private jets from all over the globe to discuss climate change and also about how they so studiously avoid paying taxes: “I feel like I’m at a firefighters’ conference and we’re not allowed to talk about water.”

Perhaps because Bregman was so uncowed in the presence of elites, Tucker Carlson invited him on his Fox News show. He seemed to admire Bregman. Well, that went south pretty quickly. Fox News never aired the segment—Carlson says it’s because he, Carlson, used the “F-word.” What he doesn’t say is that he used it more than once and that Bregman (who will probably be hosting his own Fox News show by year’s end) clearly got under his skin.

More than 100 people died in a fire in Dhaka, the capital of Bangladesh, earlier this week. The inferno began when a container of compressed gas being toted in a car exploded. You can read more about it here. Things we didn’t know: Bangladesh is roughly the same size as Iowa but with 50 times the population. 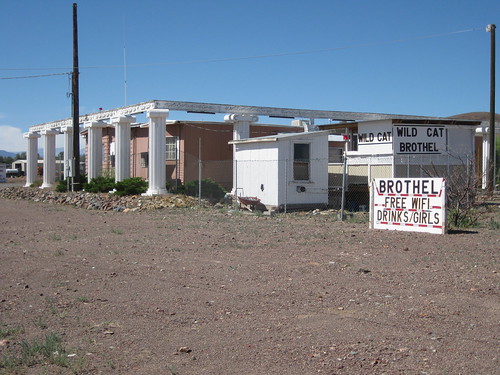 As we wended our way up Nevada highways yesterday from Beatty to Reno (a drive you all must do—once), we spotted the “town” of Mina, which appeared to house at least a dozen people. It also is home to the Wild Cat Brothel, whose sign also advertises “Free WiFi.” We regret not having stopped to say, “I’m not here for the sex, I just need to write the blog.”

There might have been a line about unlawful consent with a Mina.