When the bond is so strong it defies gravity pic.twitter.com/RV0DE0wrNb

—Scare Tactics: For the first time in tournament history, two No. 1 seeds (UVA and UNC) trail to 16 seeds at halftime. The Cavaliers were behind by 6 to Gardner-Webb and the Heels by 5. After intermission the Wahoos outscored the upstarts by 21 and the Tar Heels by 20 as both advance. 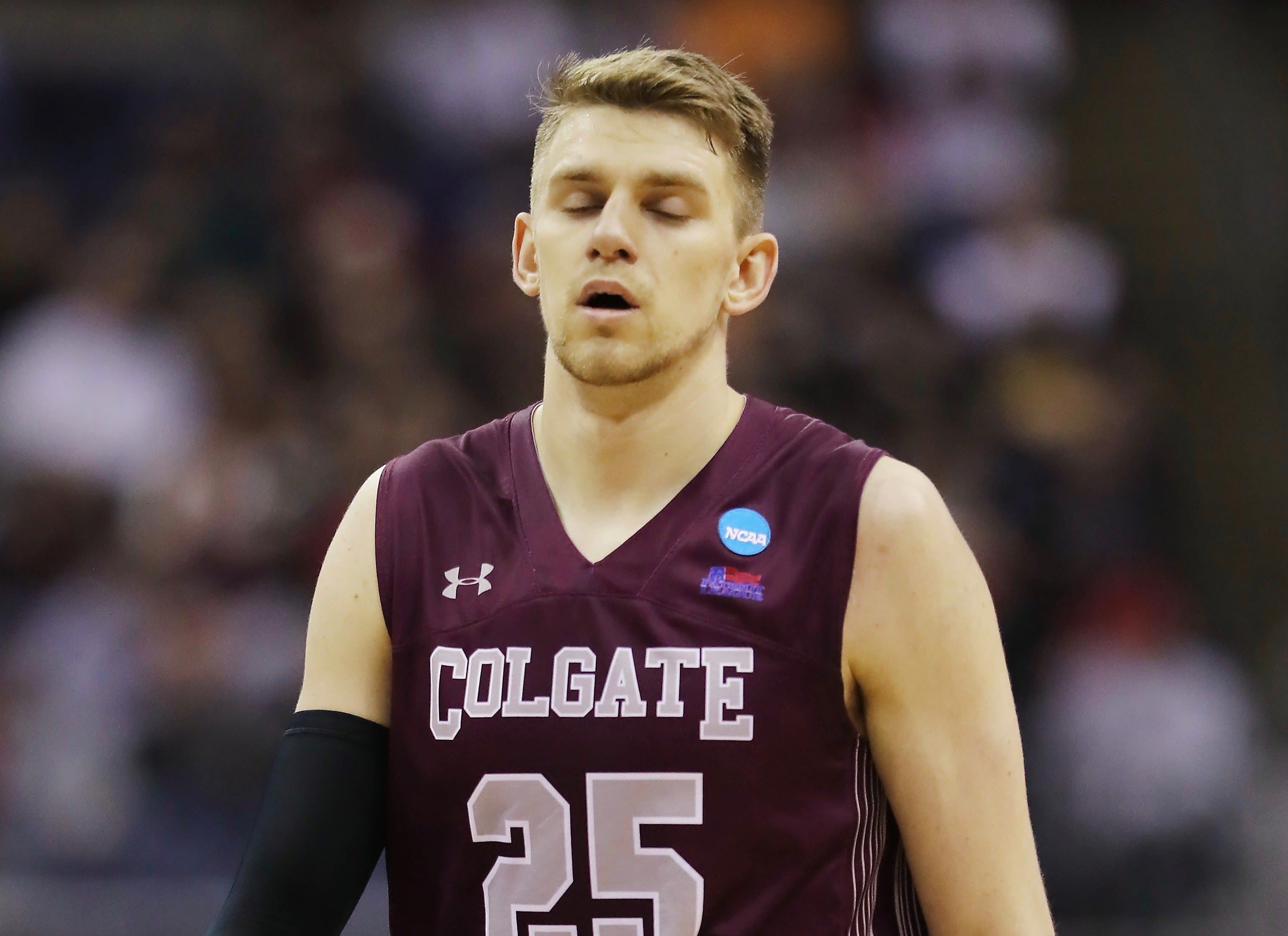 Colgate: Better to have loved and flossed…

—Pink Eye For The ‘Gate Guy: Colgate’s best player, 6’10” Rapolas Ivanauskas, the Patriot League Player of the Year, missed the entire second half with pink eye. He wears contacts and was unable to insert them. Ivanauskas took four shots and missed all of them and was a non-factor.

—Where’s The Drama?: Through two days and 32 games—in terms of games, the tourney has already passed the halfway mark—there have been zero buzzer-beaters or overtime games. In Friday’s action, no one even had the chance to attempt one. On Thursday, NMSU did and air-balled.

—Hot Halves: The three most prolific scoring outputs in a half thus far: 55, by UNC (2nd half), 54, by Duke (2nd half), and 53, by Gonzaga (1st half). Yes, those are all No. 1 seeds. The only other squad to put up a 50-point half thus far is Oklahoma, a No. 9 seed that scored 50 against Ole Miss in the first half. The Sooners’ 95-point game is the highest of th tourney. Lowest scoring half belongs to Abilene Christian, which put up 13 against Kentucky.

—Impressive Showings: Va. Tech and Oklahoma, which ran out to 22- and 17-point first-half leads, respectively. Also, the Pac-12 somewhat redeemed itself as both Oregon and Washington won.

Fall Guy: UCF’s 7’6″ Tacko Fall had 18 rebounds and will face Zion Williamson and Duke on Sunday. Get your seismographs ready. 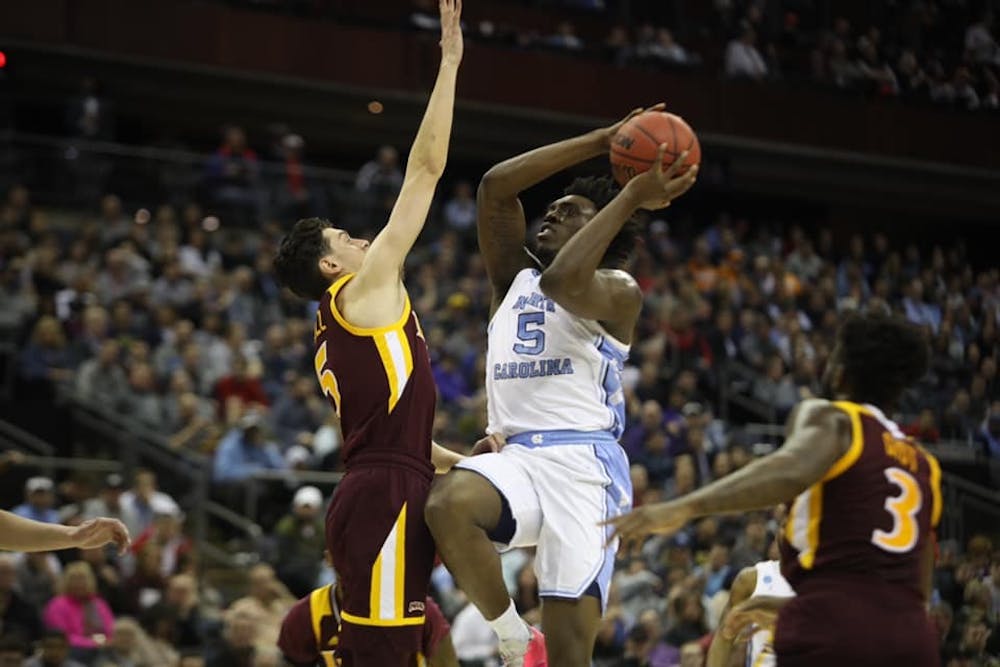 Big Little: There’s something Vernon Maxwell-meets-Dennis Rodman-ish about North Carolina frosh Nassir Little. Muscular and athletic and he always seems to be wherever the ball or action is. The 6’6″ Floridian had 19 points in just 17 minutes of action for the Heels yesterday. He’ll never lead his NBA team in scoring but he’ll be a fan favorite wherever he lands.

Adam Anteaters!: Wofford has the nation’s longest current win streak at 21 games, but coming in second is UC-Irvine at 17. The Anteaters (the most heavily played 12-seed this side of Murray State) took down Kansas State, which was without its top player, Jordan Wade. Both Wofford and UC-Irvine notched their first tourney wins in school history, as did the program we’re about to mention…

Homesley Not Homely: The leading scorer in the tournament among teams that advanced to the weekend is Liberty’s Caleb Homesley, who put up 30 in the Flames’ come-from-behind win versus Mississippi State.

Okay, we find the Phil campaign somewhat amusing, though we gotta ask, “Isn’t yellow a primary color?”…Kudos to the broadcaster who added the cherry on top to Colgate guard Jordan Burns‘ 32-point performance. After the 6’0″ sophomore scored his final three to give him his point total (2nd-best of tourney thus far) in the waning seconds, the announcer noted that his high school football coach had told him he’d never play D-1 hoops. That’s the perfect announcing complement to a well-played game. Well done…I’m not digging the 5-man team chemistry of that TBS studio show. Coach Capel has the look of someone who’s hangry and just found out the kitchen closed 5 minutes ago but the bar’s still open; I know some people who read me think I have a strong dislike of a certain person on that crew but the truth is that we were once good friends and that whatever exchanges passed between us before (thanks for keeping that alive on the inter web forever, Awful Announcing; you’re doing the Lord’s work), he is terrific on TV. That studio show needs to subtract one to two people to do better…Steve Smith, for good and bad, doesn’t hold back on the opining. He made a fantastic point in Columbus yesterday about how you can talk about team chemistry on the bus and in the locker room but the real litmus test is watching how well a team helps on defense. True dat. The other point he made, one that was flat-out salt in the wounds, was noting that Colgate’s Ivanauskas, the pink eye victim, will feel bad today but what will really haunt him is all the years to come when he reflects on how he might’ve been the difference in an upset of Tennessee if only he’d been able to play. Here’s salt in your eye!…Are Makai Mason and Payton Pritchard the same dude?…Did Chris Webber need to mention twice that Kenny Smith’s son, who entered Lori Loughlin the game in the final minute Felicity Huffman for the Tar Heels, is there on merit Lori Loughlin and is not the Felicity Huffman product of entitlement?